First professional job in 1963 at The Establishment Club in London’s Soho.

Established relationship with the Soviet Union’s Theatre for Young Spectators in Leningrad.  Received a second bursary from The Arts Council of Great Britain, this time to study children’s theatre at the Russian actors’ famed home base.

Joined Paul Elliott in creating Paul Elliott Entertainments, commuting regularly between the company’s offices in London, New York, Toronto and Sydney.  Worked as Associate Producer on ground-breaking world tours, including: The Royal Shakespeare Company’s production of Hedda Gabler, starring Glenda Jackson; Rock Hudson and Juliet Prowse in I Do! I Do!; Douglas Fairbanks Jr in The Pleasure of his Company; and Sir Michael Redgrave in The Hollow Crown and Shakespeare’s People.

In 1978 produced American cult-film star Divine in Tom Eyen’s comedy The Neon Woman at the Alcazar Theatre, San Francisco, which lead to signing a personal management contract with Divine (lasting until his sudden death from sleep apnea in 1988) and establishing Bernard Jay Management, based in New York.

Brought Divine into the world of disco with hit singles Born to be Cheap and Native Love, followed by an extraordinary six years of travelling the globe with Divine in his top-earning personal appearances at discos and arenas. Oversaw negotiations and managed the star for his movie roles in Polyester, Lust in the Dust and John Waters’ Hairspray.

Appointed Executive Producer for Brighton Cares, raising funds for those living with HIV/AIDS in Brighton, Sussex. Produced stage spectaculars for the organisation, including the 120-cast tribute to British composer and songwriter Lionel Bart, Consider Yourself.

Appointed Deputy Managing Director for Attie Van Wyk’s Big Concerts, based in Cape Town.  Producing projects included The Fantasticks starring Jason Donovan, a tour of the musical Summer Holiday, Michael Flatley in Lord of The Dance, The Magic of David Copperfield and Operama’s Aïda for one glorious performance to over 40,000 people at the rugby stadium in Pretoria.

with Douglas Fairbanks Jr on tour in Australia with The Pleasure of His Company, 1977

with Divine at Andrew Logan’s The Alternative Miss World

with Ricki Lake after the filming of Divine’s movie Hairspray, New York, 1988 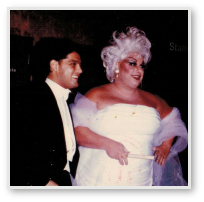 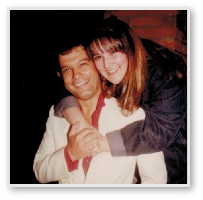 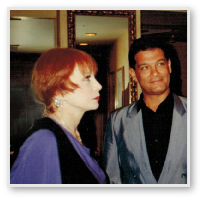